In this problem, we are simulating the dynamics of moving objects. The objects are droplets that are modeled in two dimensions as circles of various sizes, each moving at a constant velocity. When two circles touch they combine (i.e., agglomerate) into a single circular droplet with an area equal to the sum of the areas of the two combining droplets. The newly formed droplet’s position is the area-weighted average position of the two droplets at the time of contact and its velocity is the area-weighted average velocity of the two circles. (See the following example.) 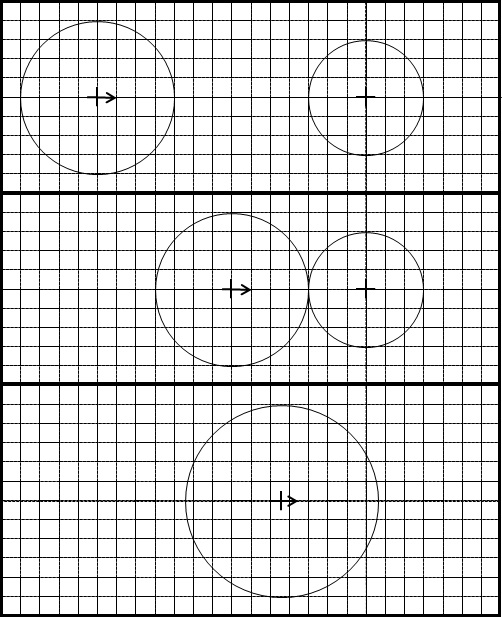 The figure to the right illustrates the process of agglomeration. In the top panel of that figure, we see the leftmost droplet with radius $4$ centered at position $(-14,0)$ and with velocity $(1,0)$ moving toward a stationary droplet of radius $3$ centered at the origin. The two droplets make contact at time $t=7.0$ as shown in the middle panel of the figure.

Given an initial configuration of droplets, your goal is to simulate their motion until reaching the final time at which an agglomeration occurs (if any). All test sets have been crafted to assure that:

Output a single line with two values $k$ and $t$, where $k$ is the number of droplets in the final configuration and $t$ is the time at which the final agglomeration occurred. If a data set results in no agglomerations, $k$ will be the original number of droplets and $0$ should be reported as the time. The value of time should be reported to have an absolute or relative error of no more than $10^{-3}$.