Your task is to write a program that computes the market value. The piece of land forms a closed polygon, whose vertices lie in the corners of unit fields.

For example, the polygon in the picture (it corresponds to the first scenario in Sample Input) contains three square fields. 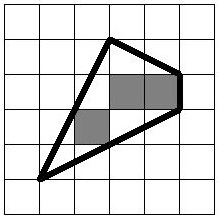 The input consists of several test scenarios, at most $1300$. Each scenario starts with a line containing one integer number $N$ ($3\leq N\leq 100$), the number of polygon vertices. Each of the following $N$ lines contains a pair of integers $X_ i$ and $Y_ i$, giving the coordinates of one vertex. The vertices are listed in the order they appear along the boundary of the polygon. You may assume that no coordinate will be less then $-100$ or more than $100$ and that the boundary does not touch or cross itself.

The last scenario is followed by a line containing single zero.

For each scenario, output one line with an integer number – the number of unit squares that are completely inside the polygon.