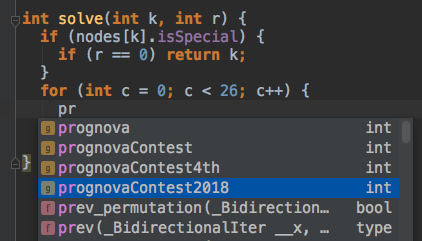 You are creating an awesome web application for this year’s hackNY hackathon. Everything goes well except that the search box in your application (which is a native HTML input tag) appears a little clumsy given that the user always has to type everything from scratch. To improve the user experience, your team has decided to add an auto completion feature to the search box. However all other team members are busy. So you are asked to program the auto completion algorithm.

The auto completion algorithm works based on a pre-defined dictionary of $n$ words. Suppose the search box contains the text $w$. When the user presses the tab key $i$ times in a row, the algorithm finds the $i$-th lexicographically smallest word from the dictionary that has $w$ as its non-trivial prefix. If there are fewer than $i$ words that have $w$ as prefix, the algorithm circulates through these words. That is, if there are $j < i$ words that have $w$ as prefix, the $(j+1)$-th tab press goes back to the lexicographically smallest word, and the $(j+2)$-th tab press gives the second lexicographically smallest word, and so on. The chosen word then replaces the text in the search box. If there are no words that have $w$ as prefix, pressing the tab has no effect. When the user types a letter, the letter is directly appended to the text.

You team has prepared some simulated user keystroke sequences for you to test the auto completion.

It is guaranteed that the total length of the text produced by all keystroke sequences does not exceed $10^6$.

For each keystroke sequence, output the text it produces on a single line.