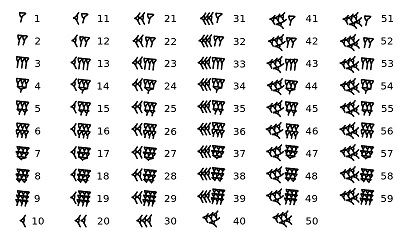 More than $4\, 000$ years ago, the ancient Babylonians used a numerical system that is well known for being the first positional numerical system. In such a system, a non-negative integer is represented by a sequence of digits such that the value of a digit depends both on itself and on its position within the sequence. The Babylonians used a base-$60$ system known as sexagesimal (not unlike our own base-$10$ decimal system) where each ‘digit’ can take values between $1$ and $59$, inclusive. (The Babylonians didn’t have a digit to represent $0$; instead they would just leave the digit position empty.) Akin to the Egyptians at the time, the Babylonians carved their equations in solid clay, which allows us to read them thousands of years later.

Your history professor, Dr. X, has asked you to decipher the Babylonian numbers he has found during a recent excavation and to convert them into our own decimal numerical system. As you are a competent translator, you have no problem deciphering the Babylonian writing, but you now need to write a program that takes the sexagesimal notation and converts it to decimal.

Each of the following $N$ lines represents a single tablet containing a number in sexagesimal format. This number is a non-empty sequence of digits separated by commas. Nonzero digits can be any integers between $1$ and $59$ (inclusive), and $0$ is represented by an empty string. The sexagesimal number does not begin with a comma, contains at least one nonzero digit, and consists of $D$ digits in total, where $1 \leq D \leq 8$.

For each test case, output a line containing the decimal representation of the sexagesimal number.