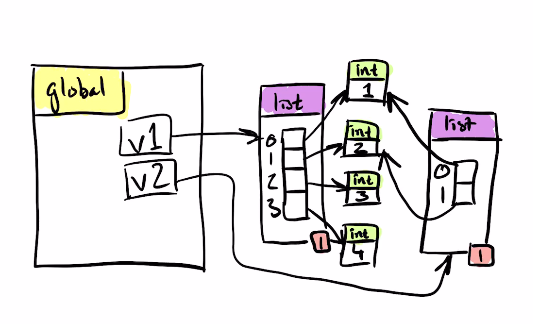 An example of a box and arrow diagram, taken from github.com/dicander/box_arrow_diagram
What an embarrassment! Itaf got 0/5 points in her last “Fundamental programming in Python” exam. She studies Engineering physics at KTH and is struggling with this course. She is not alone, as $60\% $ of her classmates failed the exam this year. The reason for this oddly high percentage is the so called box and arrow diagram (låd- och pildiagram).

In this part of the exam you are given a piece of Python code and you have to draw how the memory structure will look like when the program reaches a given line. Since Itaf is a high-rated competitive programmer her ego always came in the way whenever she tried to study for the test, because it felt “too easy”. But now she has become desperate and needs your help.

The box and arrow diagram is used to explain the memory structure inside Python. Simplified, the diagram can be seen as a directed graph with nodes (boxes) labeled from $1$ to $N$ and edges (arrows) labeled from $1$ to $M$. The boxes corresponds to the objects in the memory of a Python program. Box 1 is special, it represents the global object. An arrow being drawn from box $u$ to box $v$ in the diagram means that object $u$ stores a reference of object $v$. If $u$ stores multiple references of $v$, then you draw multiple arrows from $u$ to $v$. It is also possible for an object to contain references to itself.

Itaf now needs your help, and she will ask you $Q$ queries, each query can be one of two types.

It is guaranteed that there will not be two queries of type $1$ with same value of $X_ j$, meaning the same arrow will never be deleted twice.

For each query of type $2$, output a single line containing the reference count of object $Y_ j$.