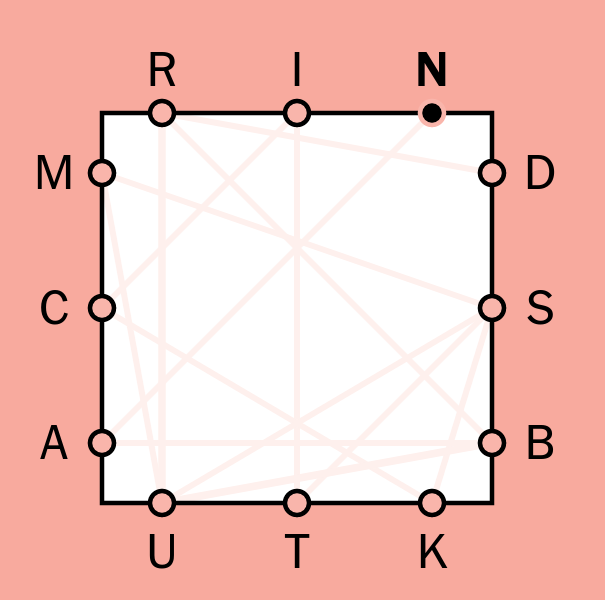 An example of the NY Times “Boxed Letters” Puzzle. This sample corresponds to sample input $1$.

The New York Times publishes a puzzle called “Boxed Letters” for puzzle enthusiasts. In this puzzle, $12$ letters are shown along the $4$ sides of a box. The task is to find words that are spelled when these letters are connected, subject to the following rules:

After trying the puzzle for a while, you remember that there are dictionaries that should make this task simple.

Can you write a program that solves a Boxed Letters puzzle given a dictionary of words?

The input consists of a single test case, which starts with an integer $n$ ($1 \le n \le 72\, 000$), the size of the dictionary. This line is followed by $n$ lines, each containing a dictionary word of $l$ uppercase English letters ($3 \le l \le 22$). All dictionary words are distinct. The next $5$ lines contains the letters around the box in compressed form. The first line contains the top row, the last line the bottom row. The first character on each of the $3$ lines in between corresponds to the box’s left side, the second character corresponds to the box’s right side. All $12$ characters are distinct uppercase English letters.

Output a word list that solves this puzzle, in the order in which the words would be entered into the puzzle. Place each word on a separate line. If there are multiple word lists that satisfy the conditions, you may output any of them. You are guaranteed that a solution exists.