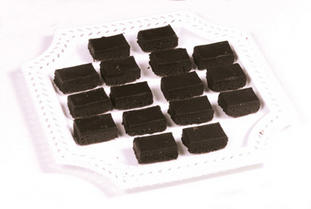 Your task is to compute the scores of Stan and Ollie given the point through which they draw their lines.

Input contains a number of test cases, at most $15$. The data of each test case appear on a sequence of input lines. The first line of each test case contains a positive odd integer $1 \le n \le 20\, 000$ which is the number of brownie points. Each of the following $n$ lines contains two integers, the horizontal ($x$) and vertical ($y$) coordinates of a brownie point. All coordinates are at most $10^6$ in absolute value. No two brownie points occupy the same place. The input ends with a line containing $0$ (instead of the $n$ of a test).

For each test case of input, print a line with two numbers separated by a single space. The first number is Stan’s score, the second is the score of Ollie when their lines cross the point whose coordinates are given at the center of the input sequence of points for this case.