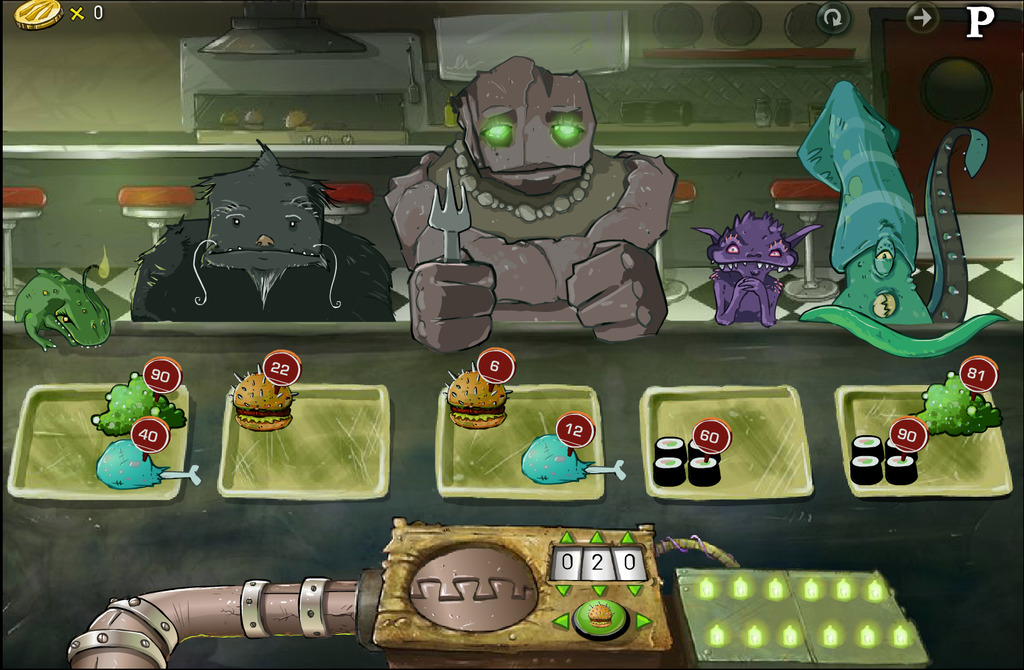 Source: Lure of the Labyrinth, used with permission of Maryland Public Television (MPT)

Theta likes to play Lure of the Labyrinth, which is an online game that uses a compelling graphic novel storyline to engage middle grades students in mathematical thinking and problem-solving. To find lost pets, students have to infiltrate a world of monsters and solve puzzles! Implemented by a professional game studio, these puzzles are quite engaging and challenging.

In the manager’s cafeteria, students are asked to practice proportions by serving $5$ monsters sitting at the table: Salamander, Yeti, Golem, Imp, and Kraken. Each monster wants some amount of burger, slop, sushi, and drumstick.

As students progress in the game and reach more difficult levels, fewer and fewer amounts are given, requiring more intuition and thinking to solve the puzzle.

Give a set of partially filled plates, write a program that computes the amount of food for the remaining slots!

The input consists of $2$ lines of $10$ entries each describing the partially filled plates. The first line describes the top row (burgers and slop), the second line describes the bottom row (sushi and drumstick). On each line, the first $2$ entries describe Salamander’s plate, the next $2$ Yeti’s, then Golem’s, Imp’s, and finally Kraken’s. Each entry is either the underscore character _ describing an empty slot or a positive integer number $a$ ($0 < a \le 200$) if it is already known. Entries are separated by single spaces. There are at least $8$ slots given. You may assume that all plates have at least one non-empty slot, and that for each kind of food there exists one plate where its amount is known.