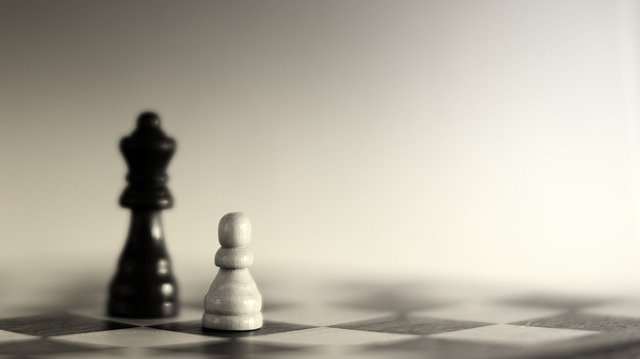 Chess by jplenio, CC0 Public Domain
The boardgame Chaos is an exotic variant of Chess, played by two players in alternating turns on an $n\times n$ playing board. All pieces have the same set of $n$ valid moves which are agreed on ahead of the game.

In a single turn a player can pick exactly one of their pieces and perform one of the following actions:

Having recently discovered Chaos, Alice and Bob are currently in the endgame of a very exciting match. Each player has a single piece left on the board and there are only two turns left, with Alice going next.

Having analysed the situation, she realises that the only way she can win is to capture Bob’s piece in her turn. If that is not possible, Alice may be able to force a tie if she can teleport her piece to a cell that Bob cannot capture in his turn. Otherwise Bob will be able to win by capturing Alice’s piece, no matter what she does in her turn. Help Alice determine her optimal outcome.

If Alice can capture Bob’s piece in her turn, output “Alice wins”.

If Alice can use her turn to force a tie by teleporting her piece to a cell that Bob cannot capture in his turn output “tie” followed by two integers $a’_ x$ and $a’_ y$, the location of any such cell. If there are multiple valid solutions, you may output any one of them.

Otherwise, if Bob is able to capture Alice’s piece no matter what she does in her turn, output “Bob wins”.