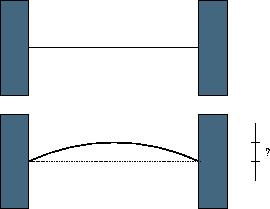 When a thin rod is mounted on two solid walls and then heated, it expands and takes the shape of a circular segment, the original rod being the chord of the segment.

Your task is to compute the distance by which the center of the rod is displaced.

The input is such that the displacement of the center of any rod is at most one half of the original rod length. The last line of input contains three $-1$’s and it should not be processed.