As part of a CS course, Alice just finished programming her robot to explore a graph having $n$ nodes, labeled $1, 2, \ldots , n$, and $m$ directed edges. Initially the robot starts at node $1$.

If operating correctly, the robot will always follow forced moves away from a node, and if reaching a node that does not have a forced move, the robot stops. Unfortunately, the robot is a bit buggy, and it might violate those rules and move to a randomly chosen neighbor of a node (whether or not there had been a designated forced move from that node). However, such a bug will occur at most once (and might never happen).

Alice is having trouble debugging the robot, and would like your help to determine what are the possible nodes where the robot could stop and not move again.

We consider two sample graphs, as given in Figures 1 and 2. In these figures, a red arrow indicate an edge corresponding to a forced move, while black arrows indicate edges to other neighbors. The circle around a node is red if it is a possible stopping node. 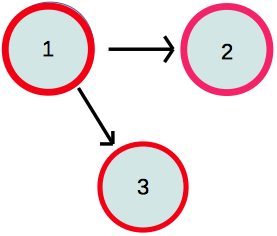 In the second example, there are no forced moves, so the robot would stay at $1$ without any buggy moves. It might also make a buggy move from $1$ to either $2$ or $3$, after which it would stop.

Display the number of nodes at which the robot might come to a rest.