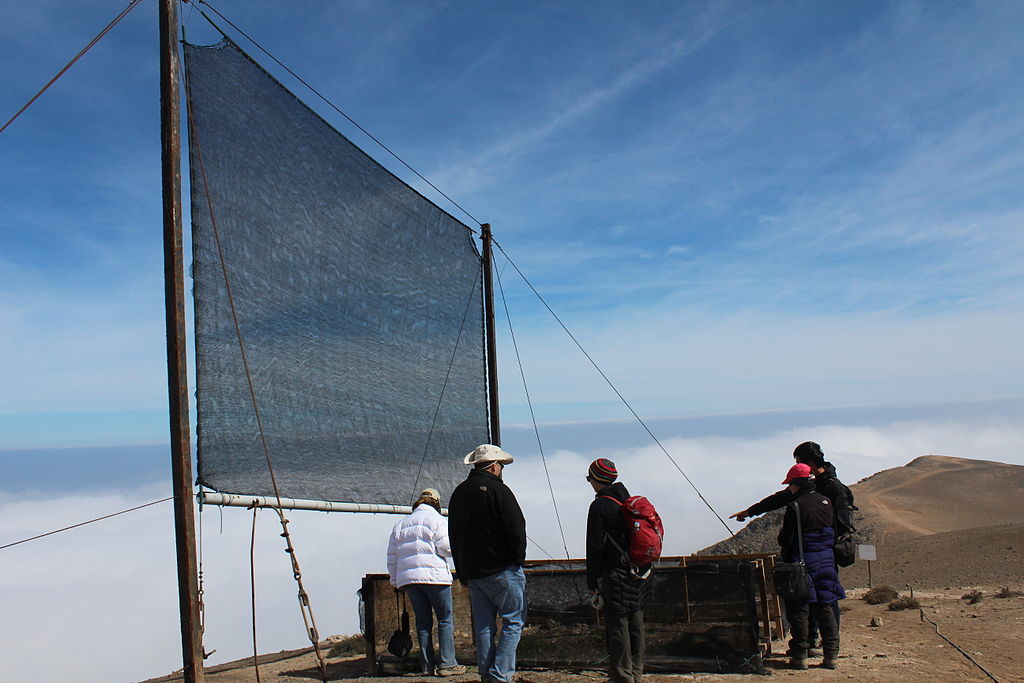 For many people, the word “Peru” conjures up images of the Inca temple Machu Picchu and llamas. But for some visitors to the country, even more remarkable is the sight of fog-catching nets, or atrapanieblas, that Peru is using to harvest water from dense fogs. These nets capture tiny droplets from the fogs, and the water trickles down pipes into troughs that are used to irrigate crops and from which livestock drink. Well, not only livestock — the fog water is an ingredient in a local beer brand, too. According to The Economist, as early as the 1990s, some villages were capturing as much as $8\, 000$ litres of water daily. Today, certain regions in Peru are capable of producing $1\, 400$ litres per second, if the infrastructure is fully deployed.

The nets that are erected to catch the fogs are also modelled as axis-aligned rectangular regions lying in the same $x$-$y$ plane (but not necessarily with lower height $0$, as is the case for the fogs). Since building a single rectangular net of sufficient length and height to catch all possible fogs would be prohibitively expensive, it was decided that for the best use of public money, the nets would be installed incrementally. Initially (i.e., on day $0$), there are no nets. Each day, after all the fogs have lifted, net maintainers determine how many fogs were “missed” that day – that is, how many fogs corresponded to rectangles that were not completely contained in the region of the $x$-$y$ plane covered by nets. The workers then add rectangular net “patches” of minimum total area so that the resulting array of nets would have caught all the fogs that day. The next day, the fogs roll in again, they lift, the workers add more patches (if necessary), and the cycle continues. Note that the portion of the $x$-$y$ plane covered by nets at any point in time is a union of axis-aligned rectangles, but in general does not constitute a single rectangular region.

Given a complete description of the $n$ originator fogs, count the total number of fogs that are missed.

The first line of input contains a positive integer $n$ $(n \leq 1\, 000)$, the number of originator fogs. This is followed by $n$ lines, the $i$-th of which contains the parameters of $F_ i$ as eight space-separated integers in this order:

– the number of fogs generated by $F_ i$

– the number of days between consecutive fogs generated by $F_ i$

– the distance to which each subsequent fog generated by $F_ i$ shifts to the right (if $\Delta x_ i$ is negative, the shift is to the left)

You can assume that

Output a single integer, the total number of fogs that are missed.