Gokigen Naname is a Japanese puzzle game played on a square grid in which numbers in circles appear at some of the intersections on the grid.

The objective is to draw diagonal lines in each cell of the grid, such that the number in each circle equals the number of lines extending from that circle. Additionally, it is forbidden for the diagonal lines to form an enclosed loop. 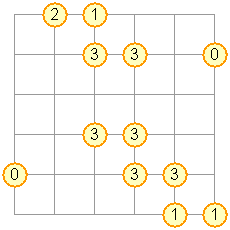 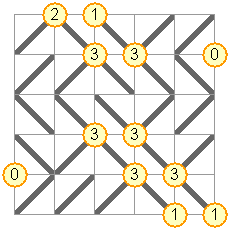 The first line of the input contains a single integer $n$ ($2 \le n \le 7$), the number of cells along each of the sides in the square grid. Then follow $n + 1$ lines containing the contents of the intersections of the grid cells. Each such line will contain a string of $n + 1$ characters, either a digit between 0 and 4, inclusive, or a period (’.’) indicating that there is no number at this intersection (arbitrarily many lines may connect to it).

The output should contain $n$ lines, each line containing exactly $n$ characters. Each character should either be a slash or a backslash, denoting how the corresponding grid cell is filled.