In Byteland, there are two leading video card manufacturers: Bitotronics and 3D-Bytes. Their top-of-the-line cards are quite similar. Each of them consists of many nodes, connected with wires transferring the signal that is being processed. The products contain two kinds of nodes: sockets and processors. The wire network fulfills the following conditions:

Bitthew loves to tinker with computer hardware. He has bought two video cards, one from each manufacturer. Since accidentally the cards have the same number of sockets, he has decided to connect each socket of the Bitotronics card to a distinct socket of the 3D-Bytes card with cables. The device he obtained looks like this: 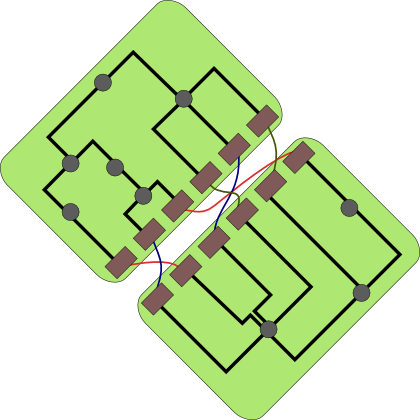 Bitthew would like to squeeze out maximum processing power from the device. In order to do that, he wants to find a path through wires and cables that the processed signal can take. The path should visit each node of both cards exactly once, and it should start and end at the same node on the same card. Help Bitthew find out whether this can be done.

The first line of the input contains the number of test cases $T$, where $1 \le T \le 35$. The descriptions of the test cases follow:

Print the answers to the test cases in the order in which they appear in the input. For each test case print a single line containing the answer. If there exists no path with the desired properties, output NO. Otherwise, output YES followed by a description of the path: $n+m+2k$ distinct nodes in the order in which the signal will pass through them. Every two consecutive nodes should be connected by a wire or a cable. Additionally, the first and the last node must be connected.