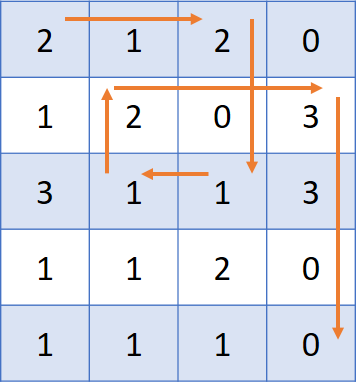 You are on an $n \times m$ grid where each square on the grid has a digit on it. From a given square that has digit $k$ on it, a Move consists of jumping exactly $k$ squares in one of the four cardinal directions. A move cannot go beyond the edges of the grid; it does not wrap. What is the minimum number of moves required to get from the top-left corner to the bottom-right corner?

Each input will consist of a single test case. Note that your program may be run multiple times on different inputs. The first line of input contains two space-separated integers $n$ and $m$ ($1 \le n, m \le 500$), indicating the size of the grid. It is guaranteed that at least one of $n$ and $m$ is greater than $1$.

The next $n$ lines will each consist of $m$ digits, with no spaces, indicating the $n \times m$ grid. Each digit is between 0 and 9, inclusive.

Output a single integer on a line by itself representing the minimum number of moves required to get from the top-left corner of the grid to the bottom-right. If it isn’t possible, output -1.