Relatively close to Mars, there is a small group of space habitats shaped as discs. To make movement between them easy, they are all perfectly aligned in the Z coordinate. But while movement is usually easy, there are cases when it’s not:

“Hey Sophia, this situation reminds me of that story you told about your father” Galatea said. “Oh, the one where he had issues getting back to our castle? Well.. sure, it was a kind of ship, and had steering problems too. I don’t care about how many ways we can get to a space habitat with a repair station though” Sophia replied. Galatea had tried to fix their steering engines, but quickly figured that they needed to get to a proper repair station.

Sophia’s spaceship is an older model, with some rather weird quirks. For one, the ship must either have its nose or tail faced directly at the habitat’s centre to dock. It also has engines on its nose; so while they can’t steer in any direction right now, they can accelerate and decelerate at $a$ clicks per second.

“I guess we can jump from habitat to habitat by just waiting, right? The habitats rotate with a fixed speed; at some point we’ll point towards some other habitat’s centre.” she explained. “That’ll probably take ages though, and you forget the abandoned habitats: They decided to stop their rotation for safety reasons, right?” Sophia muttered. “I’m not so sure…I do recall some habitats spinning really fast, so it may be faster than waiting for the repair bots.” Galatea argued. “I highly doubt that, but we’ll see. Computer, find the fastest path to a space habitat with a repair station.” 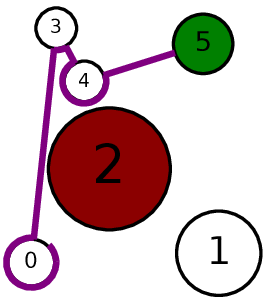 Figure 1: Visualisation of Sample Input 1, and the fastest path to the repair station habitat.

Print out the time it takes to get from their current location to a space habitat with a proper repair station. Your answer must have an absolute or relative error of at most $10^{-6}$.

If their ship is unable to reach a space habitat with a proper repair station, print out request repair bot assistance instead.