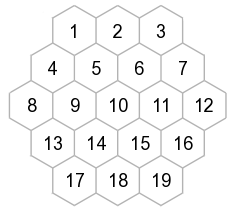 The game starts with $S$ checkers on the board. Multiple checkers might start in the same position. Each checker also has an associated integer value between 0 and 50, inclusive. A turn consists of choosing a checker and moving it to an adjacent position, which increments your score by the value of that checker. Checkers cannot move off the board. Each position can contain any number of checkers at the same time.

For each test case, output one line containing “Case #$x$: ” followed by the minimum possible score of a finished game.