John wants to put a hidden camera in a room. For this problem, we ignore the vertical dimension and treat the room as a two-dimensional object. The room has the shape of a convex polygon. The camera is placed on a wall, halfway between two corners. The camera has a limited view: the borders of the view are given by the two lines that intersect the wall at a 45 degree angle. John wants to know how much of the room is visible to the camera. Can you help him? 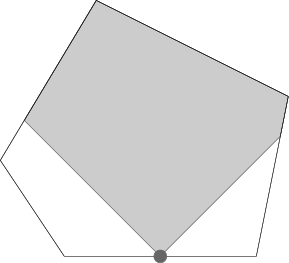 The corners are given in counterclockwise order. All angles are strictly between $0$ and $180$ degrees. The camera is placed exactly halfway between the first two corners in the input.