Sorting numerical data not only makes it easy to search for a particular item, but also makes better use of a CPU’s cache: any segment of data that’s contiguous in memory will describe a set of items that are similar in some sense. Things get more complicated if our data represents points on a 2D grid. If points $(x,y)$ are sorted by $x$, breaking ties by $y$, then adjacent points will have similar $x$ coordinates but not necessarily similar $y$, potentially making them far apart. To better preserve distances, we can sort the data along a space-filling curve.

The Hilbert curve starts at the origin $(0,0)$, finishes at $(s,0)$, in the process traversing every point in axis-aligned square with corners at $(0,0)$ and $(s,s)$. It has the following recursive construction: split the square into four quadrants meeting at $(s/2, s/2)$. Number them $1$ to $4$, starting at the lower left and moving clockwise. Recursively fill each of them with a suitably rotated and scaled copy of the full Hilbert curve.

Here are the first two iterations: 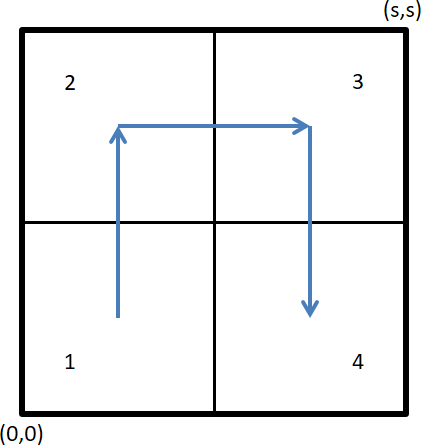 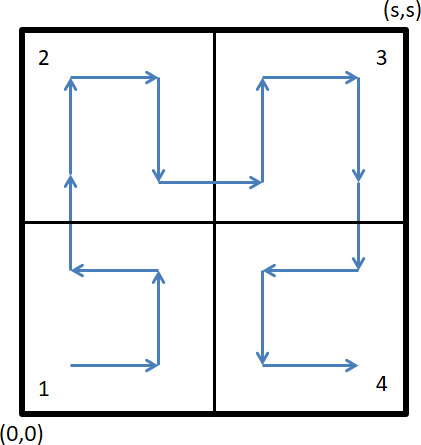 The Hilbert Curve is built by repeating this construction infinitely many times. The following diagram shows the first six steps of building the Hilbert Curve: 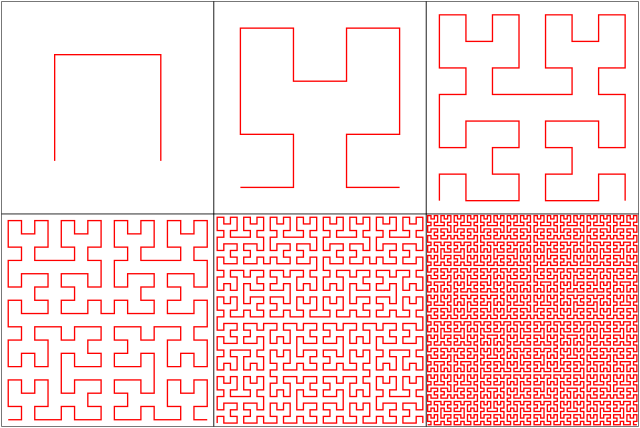 Given some places of interest inside of a square region, sort them according to when the Hilbert curve visits them, starting from $(0,0)$. Without going into gory detail about Fractal theory, note that making $s$ odd guarantees that all integer points are visited just once, so their visitation order in relation to each other is unambiguous.

Output the $n$ ordered pairs, one per line, with $x$ and $y$ separated by a space, Hilbert-sorted according to their positions.