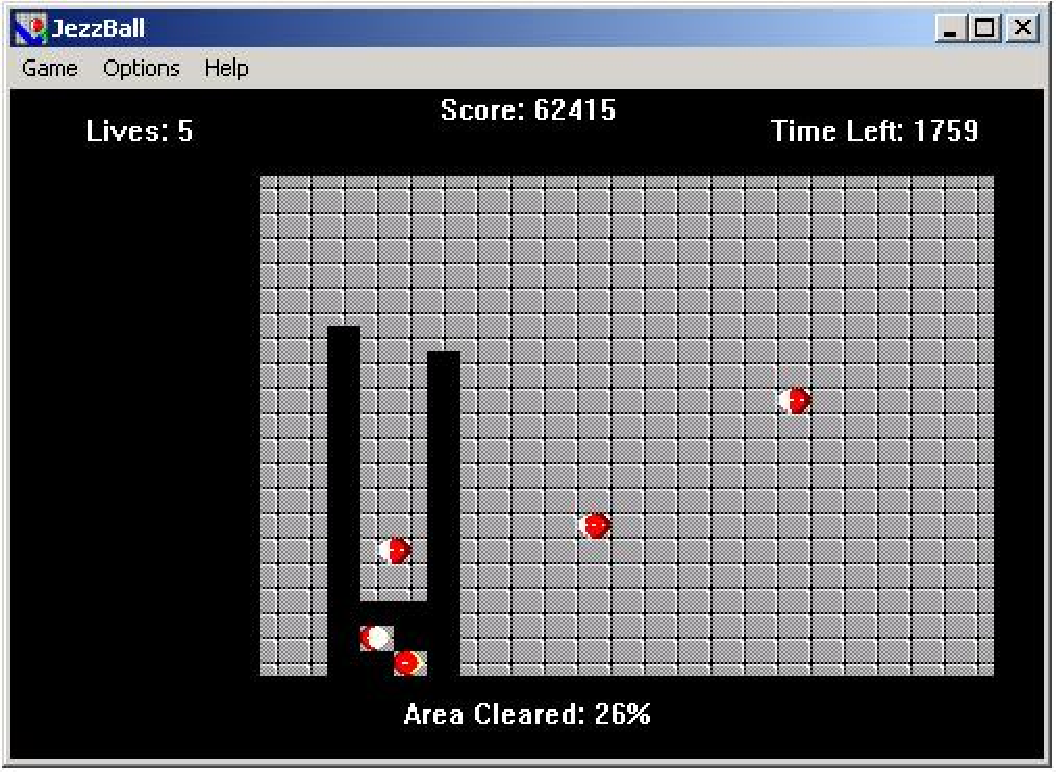 “JezzBall is a computer game in which red-and-white ’atoms’ bounce about a rectangular field of play. The player advances to later levels (with correspondingly higher numbers of atoms and lives) by containing the atoms in progressively smaller spaces, until at least $75\% $ of the area is blocked off.” (wikipedia.org)

The picture to the right is a screenshot from the original game, where the player has already covered some space (the black part). In this problem we will consider a slightly different, non-discrete, version of the game. That is, while the length unit is still pixels, you should treat them as non-discrete in the sense that all objects can be at non-integer coordinates and all movements are continuous.

The player can divide the playing field in two by shooting a horizontal or vertical ray from (in this problem) a fixed point on the playing field. The ray will then extend in both directions simultaneously (up and down for vertical rays, or left and right for horizontal rays) at a uniform speed (in this problem always $200$ pixels per second). The rays will also be infinitely thin. If no atom touches any part of the ray while it’s still being extended, the field has sucessfully been divided. Otherwise the player loses a life.

If an atom touches the endpoint of an extending edge, this will not be counted as a hit. Also, if an atom hits the ray at the same instant it has finished extending, this will also not count as a hit. Write a program that determines the minimum time the player must wait before he can start extending a ray so that an atom will not hit it before the ray has been completed.

For each test case, output the minimum time until the player can extend either a horizontal or vertical ray without an atom colliding with it while it is being drawn. If no such time is found during the first $10\, 000$ seconds, output “Never” (without quotes).

The input will be constructed so that if the first time occurs within the first $10\, 000$ seconds, it will be during an interval at least $10^{-5}$ seconds long.

The output time should be accurate to an absolute or relative error of at most $10^{-6}$.