The Maze Makers is a publisher of puzzle books. One of their most popular series is maze books. They have a program that generates rectangular two-dimensional mazes like the one shown in Figure 1. The rules for these mazes are: (1) A maze has exactly two exterior cell walls missing, opening to two distinct terminal cells, (2) starting from any one cell, all other cells are reachable, (3) between any two cells in the maze there is exactly one simple path. Formally, a path is a sequence of cells where each cell and its successor on the path share an edge without a wall. A simple path is a path that never repeats a cell.

The Maze Maker program uses hexadecimal digits to encode the walls and passages of a maze. For each cell in the maze there is a corresponding hex digit. As shown in Figure 2, the 1’s and 0’s in the 4 digit binary representation of a hex digit correspond to the walls (1’s) and passages (0’s) for each cell in the maze. For example, the binary encoding for the hex digit B is 1011. Starting at the top of the cell and moving clockwise around it, this digit represents a cell with a wall at the top, a passage to the right and walls at the bottom and to the left. A path between two maze cells successively moves one cell up, down, left or right, going through passages only.

Our sample maze is a legitimate maze in that all cells are reachable and there is a unique simple path between any pairs of cells in the maze. Your goal is to write a program that reads the hexadecimal descriptions of a potential maze and tests to determine if it is legitimate. If there is a problem, your program must report only the first problem, as detailed below in the section titled "Output".

Each maze description will start with two integers, $H$ and $W$, indicating the height and width of the maze, respectively, such that $1 \leqslant H \leqslant 50$ and $2 \leqslant W \leqslant 50$. Following this first line will be $H$ rows of hexadecimal digits, with each row consisting of $W$ digits.

The input is terminated with a line displaying a pair of zeros.

For each candidate maze, the program should output the first one of the following statements that applies:

The classification statements are defined formally as follows:

Note well that for the second case given in the following examples, there is no path between the start and finish and there is an unreachable cell; the correct output should simply be NO SOLUTION, because that error message is listed first in the above list. Similarly, in the fourth example given, UNREACHABLE CELL is reported because that error has priority over the multiple paths.

The following maze diagrams correspond to the mazes specified in the sample input: 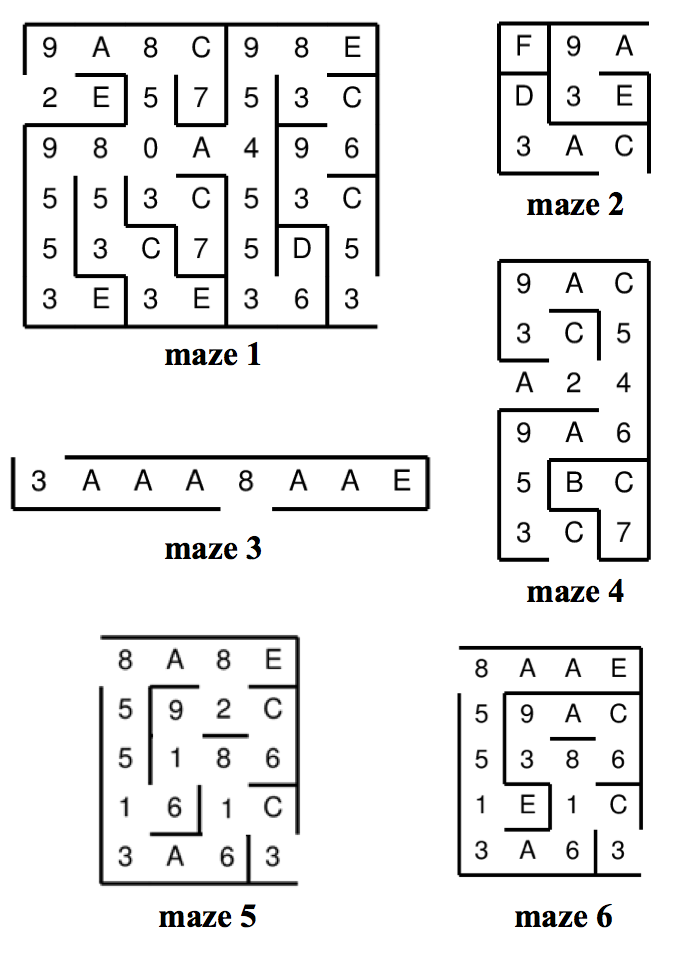