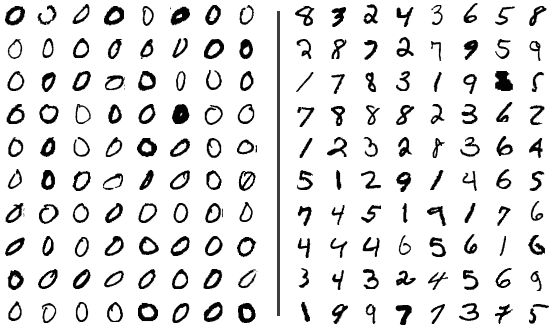 The objective of this problem is to train a Binary Neural Network to classify images. The training occurs on your own computer, and you should submit a program which simply outputs the trained weights.

The images are of handwritten digits from the well-known MNIST dataset. Your task is to classify each image into one of two classes: either the digit $0$, or not the digit $0$ (i.e. digits $1$ through $9$).

An MNIST image is originally a collection of $28\times 28$ pixels, each pixel being a byte, but for this problem it is given to us in a compressed form of $51$ bits. For the $m^\textrm {th}$ image, the input is denoted by

that is, $x^ m$ is a vector of $51$ values (either $-1$ or $1$). Its corresponding label is $y^ m=0$ if the image is of digit $0$, or $1$ if it is not of digit $0$. There are a number of labelled images given for training, and a separate set of images reserved for testing (and known only to the judging software). The goal is to maximize the classification accuracy on the test images using a binary neural network, which we explain next.

For this problem, we use the following binary neural network architecture, illustrated below. After the input layer, there are three layers:

Next, we describe how these nodes work in detail. 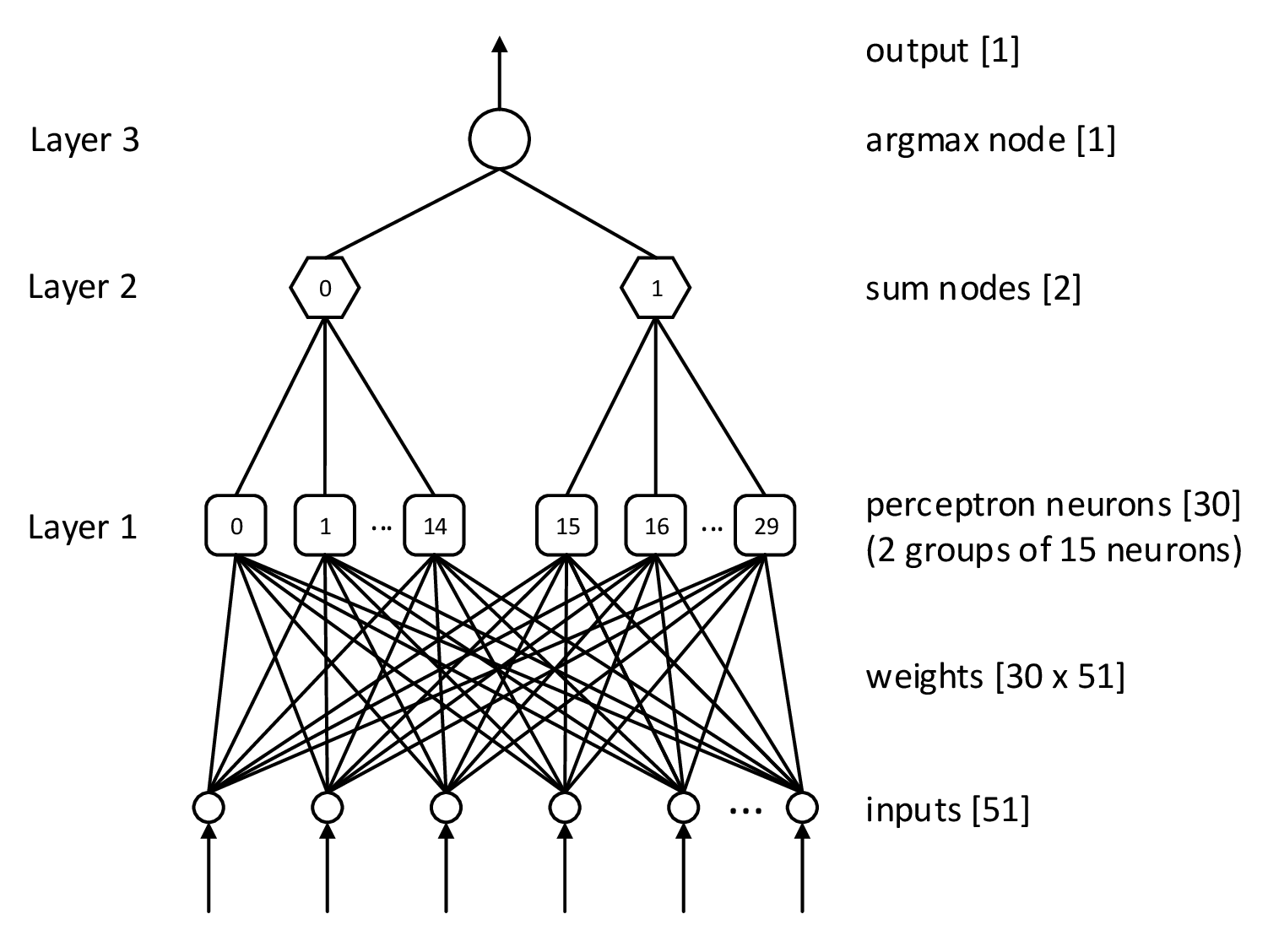 The weights for each perceptron node are configurable. Each node $k$ has $51$ weights

There is one sum node per class. The behavior of the sum nodes is always the same. Each produces the sum of the outputs of the $15$ perceptron nodes it is connected to. Thus, its output is an integer in the range $[-15,15]$, where a high value indicates confidence in class corresponding to the sum node.

For a set of weights and an input $x^ m$, the network computes the results of the perceptron and sum nodes to produce the predicted label $\hat{y}^ m$:

In case both sum nodes produce the same value, the argmax node breaks the tie by choosing to output $0$.

The goal is to train the binary neural network and maximize the ‘accuracy’ $A$ on the test dataset of $M$ images. Accuracy is defined as:

You are provided with training images with their correct classes and should devise a training algorithm to choose perceptron node weights $w^0, w^1, \ldots , w^{29}$ that give good accuracy on the secret testing data.

Use the links on the top right of the web page for this problem to download the training data to your own computer and a script to help evaluate accuracy on the training data. The training data comes as a text file with one example per line. Line number $m$ has example $x^ m$ followed by $y^ m$. Therefore, it has $51$ values from $\{ -1,1\} $, followed by a label of $0$ or $1$.

The program you submit should read no input.

The judge uses your weights on a different dataset, the test dataset, which consists of between $1\, 000$ and $2\, 000$ images. The judge calculates the accuracy of your algorithm using the equation given earlier.

The distribution of image labels in the training data is the same as the distribution in the secret testing data. Images labeled $0$ and $1$ (non-$0$ digits) appear with roughly the same frequency.

Your score on the problem is the accuracy on the test dataset, measured in percent, rounded to two decimal digits of precision.

The motivation for using binary neural networks is that they greatly simplify the forward convolution operations and dramatically reduce the on-chip consumed energy ($60$ times improvement) over more general networks. Therefore, a candidate architecture for performing inference in future mobile phones is to train the binary neural network model on the cloud and then download the weights to the mobile phone for inference. Indeed, in this problem, your algorithm plays the role of the cloud training, and our tester plays the role of the mobile phone inference.