After solving a difficult programming problem, you decide to take a break and play a puzzle game. After playing the game for a while, you decide to write a program to solve it for you.

The game is played on a grid with $R$ rows and $C$ columns. Each square of the grid contains a black dot in the centre and black lines in the direction of some, none, or all of its north, east, south, and west neighbouring squares. Your objective in this game is to move your playing piece from the centre of the square in the $i_{1}$th row and the $j_{1}$th column, where it begins, to the centre of the square in the the $i_{2}$th row and the $j_{2}$th column.

The following $R$ lines of input each contain one row of the grid, from north to south. Each of these lines contains exactly $C$ strings of letters, separated by spaces, that correspond to squares of the grid, from west to east. Their format is as follows: 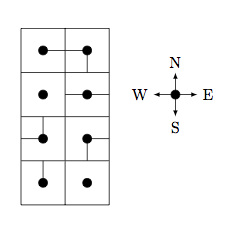