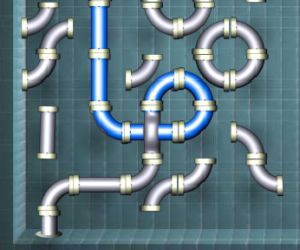 After writing a solver for the “moveable maze” game last week, you have grown tired of it. After all, you already know the optimal solution. To entertain yourself, you find another puzzle game called “Pipes”, and play that for a while. On one puzzle, you have not been able to find a solution by hand, and you think that there is no solution. You decide to write a program to tell you whether this is the case.

The game is played on a grid with $R$ rows and $C$ columns. Each square of the grid contains a black dot in the centre and black lines in the direction of some, none, or all of its north, east, south, and west neighbouring squares, with the following restriction: if two opposite directions both have lines, then at least one of the other two directions has a line as well. In other words, it is forbidden for a square to consist of a straight line.

Your task is to determine whether a given grid has a solution.

The input consists of several test cases, at most $10$.

The following $R$ lines of input each contain one row of the grid, from north to south. Each of these lines contains exactly $C$ strings of letters, separated by spaces, that correspond to squares of the grid, from west to east. Their format is as follows:

Input is terminated by a line containing 0 0. These zeros are not a test case and should not be processed.

For each test case, output “SOLVABLE” if there is a solution to the puzzle, and “UNSOLVABLE” otherwise.