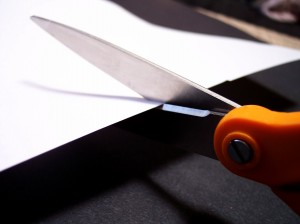 The first line of the input consists of two integers $N$, $M$: The number of vertices in the original polygon, and the number of lines drawn by Jack and Jill.
Then follows $N$ lines, each consisting of two integers $X_ i$ and $Y_ i$, representing the coordinates of the $i^\textrm {th}$ of the vertex in original polygon given in a counter-clockwise order.
Then follows $M$ lines, each consisting four real numbers $X_1, Y_1, X_2,$ and $Y_2$, representing the two endpoints of a line drawn by Jack and Jill.

The output should be a single line consisting of the area of the largest polygon created. Your answer must have an absolute or relative error of at most $10^{-6}$.