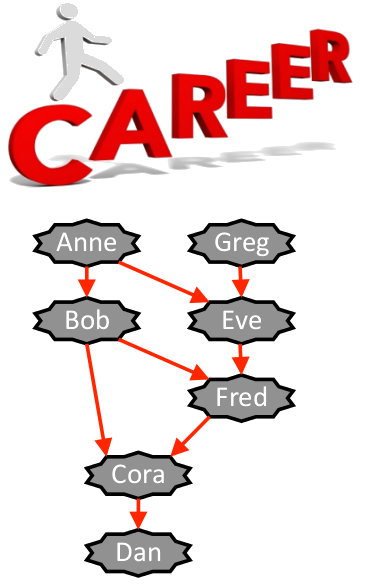 The Fair Inc. administration decided to promote the best employees and limited the number of promotions to a fixed interval $[A,B]$. The directors compared the employees’ performance and their evaluations resulted in a consistent precedence relation among employees, which has to be respected by promotions. This means that, for every pair of employees $x$ and $y$, if $x$ outperformed $y$, then $y$ may be promoted only if $x$ is promoted.

In order to understand whether the data collected so far is enough for ensuring fairness, the executive chairman wants to know:

Consider the example depicted in the figure. There are seven employees and eight precedence rules. An arrow from an employee $x$ to an employee $y$ means that $x$ outperformed $y$. The number of promotions is limited to the interval $[3,4]$. Therefore:

The precedence relation is consistent in the sense that, if an employee $x$ outperformed an employee $y$, $y$ did not outperform (directly or indirectly) $x$.

The first line of the input has four space separated integers: $A$, $B$, $E$, and $P$. $A$ and $B$ are the interval endpoints, $E$ is the number of employees and $P$ is the number of precedence rules. Employees are identified by integers, ranging from $0$ to $E-1$.