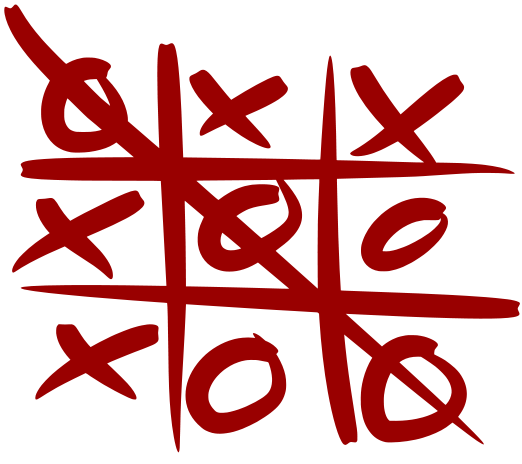 Congratulations! You are starting your internship for the famous digital archaeologist, Endiana Jones. You have been assigned to evaluate the results of saved games of a 1980’s version of Tic-Tac-Toe. In those days, programmers had very little storage, so they saved game state as compactly as possible. In this case, the state was in a 32-bit register. Bits $0-8$ stored the positions that had been played and bits $9-17$ indicated an X or O. A set bit ($1$ bit) indicated a played position for bits $0-8$ or that X played for bits $9-17$. Bit 18 indicated the next player to play. (Bits are numbered from right to left, starting at the least-significant bit.) If bit $18$ is set (is $1$), it is X’s turn to play next. Visually the bits were laid out as shown in Figure 1:

Figure 1: Bits in a game state

The Tic-Tac-Toe implementation was very simple, and a cat’s game (draw or tie) was not called until all positions had been played. Your task is to interpret the state of the game given an octal integer.

Quick review of Tic-Tac-Toe: Two players play the game. Either player may go first. One player’s mark is X and the other’s is O. Each player takes turns placing their mark in one of the empty squares. If a player gets three marks in a horizontal, vertical, or diagonal row, that player wins. If there is no winner and there are no empty spaces left, the game stops, and the game is declared “Cat’s” game.

The first line of input consists of a single decimal integer $c$ ($1 \leq c \leq 10\, 000$), the number of states to evaluate. Each of the following $c$ lines will have a single octal number representing the state of a game. All numbers will follow the convention of writing octal numbers with a leading $0$. All game states will be legal, that is, achievable in a real game of Tic-Tac-Toe.

For each game state number print a single line indicating the state of the game. The four possible output lines are: