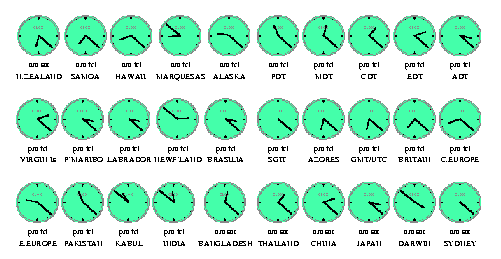 Prior to the late nineteenth century, time keeping was a purely local phenomenon. Each town would set their clocks to noon when the sun reached its zenith each day. A clockmaker or town clock would be the “official” time and the citizens would set their pocket watches and clocks to the time of the town – enterprising citizens would offer their services as mobile clock setters, carrying a watch with the accurate time to adjust the clocks in customer’s homes on a weekly basis. Travel between cities meant having to change one’s pocket watch upon arrival.

However, once railroads began to operate and move people rapidly across great distances, time became much more critical. In the early years of the railroads, the schedules were very confusing because each stop was based on a different local time. The standardization of time was essential to efficient operation of railroads.

United States railroad companies began utilizing Fleming’s standard time zones on November 18, 1883. In 1884 an International Prime Meridian Conference was held in Washington D.C. to standardize time and select the Prime Meridian. The conference selected the longitude of Greenwich, England as zero degrees longitude and established the $24$ time zones based on the Prime Meridian. Although the time zones had been established, not all countries switched immediately. Though most U.S. states began to adhere to the Pacific, Mountain, Central, and Eastern time zones by 1895, Congress didn’t make the use of these time zones mandatory until the Standard Time Act of 1918.

Today, many countries operate on variations of the time zones proposed by Sir Fleming. All of China (which should span five time zones) uses a single time zone - eight hours ahead of Coordinated Universal Time (known by the abbreviation UTC – based on the time zone running through Greenwich at $0$ degrees longitude). Russia adheres to its designated time zones although the entire country is on permanent Daylight Saving Time and is an hour ahead of their actual zones. Australia uses three time zones – its central time zone is a half-hour ahead of its designated time zone. Several countries in the Middle East and South Asia also utilize half-hour time zones.

Since time zones are based on segments of longitude and lines of longitude narrow at the poles, scientists working at the North and South Poles simply use UTC time. Otherwise, Antarctica would be divided into $24$ very thin time zones!

Time zones have recently been given standard capital-letter abbreviations as follows:

Given the current time in one time zone, you are to compute what time it is in another time zone.