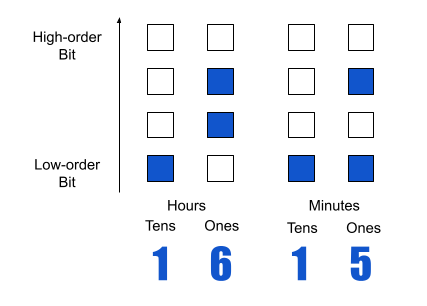 Write a program that will take a $24$-hour time and print the corresponding watch face.

Output four lines with a representation of the watch face displaying the given time. The tens of hours shall be in the $1$st column, the single hours in the $3$rd, the tens of minutes in the $7$th, and the single minutes in the $9$th. Use asterisks to represent bits that are set and periods to represent bits that are clear. Columns not used are to be filled with spaces. No extra whitespace are to appear at the beginning or end of any output line.