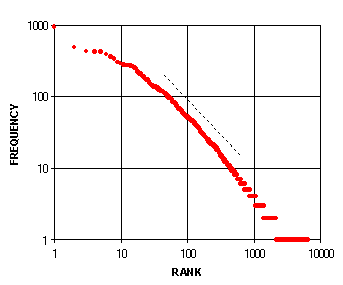 Harvard linguistics professor George Kingsley Zipf (1902-1950) observed that the frequency of the $k$th most common word in a text is roughly proportional to $1/k$. He justified his observations in a book titled Human behavior and the principle of least effort published in 1949. While Zipf’s rationale has largely been discredited, the principle still holds, and others have afforded it a more sound mathematical basis.

You are to find all the words occurring $n$ times in an English text. A word is a sequence of letters. Words are separated by non-letters. Capitalization should be ignored. A word can be of any length that an English word can be.

Input consists of several test cases. The first line of each case contains a single positive integer $n$. Several lines of text follow which will contain no more than $10\, 000$ words. The text for each case is terminated by a single line containing EndOfText. EndOfText does not appear elsewhere in the input and is not considered a word.

For each test case, output the words which occur $n$ times in the input text, one word per line, lower case, in alphabetical order. If there are no such words in input, output the following line:

Leave a blank line between cases.