You are agent B100. A pair of prominently dressed circus artists is traveling over the roads of the city and your mission is to find out where they are headed. All we know is that they started at point $s$ and that they are heading for one of several possible destinations. They are in quite a hurry, though, so we are sure they will not take a detour to their destination.

Alas, prominently dressed as they may be, the duo is nowhere to be seen. Fortunately, you have an exceptional sense of smell. More specifically: your nose will never let you down. You can actually smell they have traveled along the road between intersections $g$ and $h$.

Where is the elusive duo headed? Or are we still not sure? 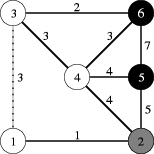 Figure 1: A visual representation of the second sample. The duo is travelling from the gray circle to one of the two black circles, and you smelled them on the dashed line, so they could be heading to 6.

There is at most one road between a pair of intersections. One of the $m$ lines describes the road between $g$ and $h$. This road is guaranteed to be on a shortest path to at least one of the possible destinations.