Mancala is a family of board games played around the world, sometimes called sowing games, or count-and-capture games, which describes the game play. One simple variant is a solitaire game called Tchoukaillon which was described by Véronique Gautheron. Tchoukaillon is played on a board with an arbitrary number of bins numbered $1, 2, \ldots $, containing $b[1], b[2], \ldots $ counters respectively and an extra empty bin called the Roumba on the left. 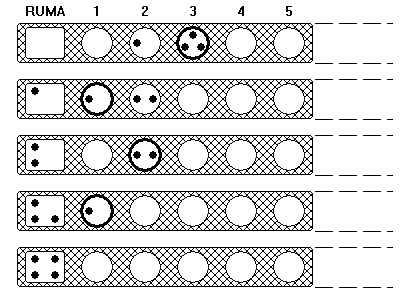 A single play consists on choosing a bin, $n$, for which $b[n] = n$ (indicated by the darker circles in the diagram) and distributing the counters one per bin to the bins to the left including the Roumba (getting the next diagram below in the figure above). If there is no bin where $b[n] = n$, then the board is a losing board.

Write a program which finds the winnable board for a total count input.

The first line of input contains a single integer $P$, ($1 \le P \le 200$), which is the number of data sets that follow. Each data set should be processed identically and independently.

Each data set consists of a single line of input. It contains the data set number, $K$, followed by a single space, followed by the total count $N$ ($1 \le N \le 2000$) of the winnable board to be found.