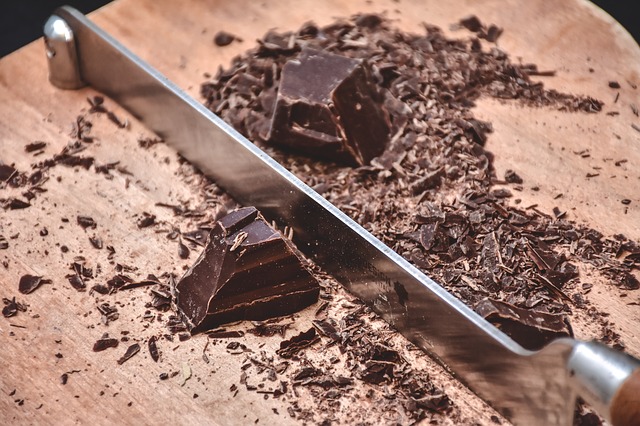 Photo of a chocolate being cut. Image from Simone_ph at pixabay.com

Quido and Hugo are making a chocolate cake. The central ingredient of the cake is a large chocolate bar, lying unwrapped on the kitchen table. The bar is an $M \times N$ rectangular grid of chocolate blocks. All of the $MN$ blocks are rectangles of identical shape and size. The chocolate bar is of top quality and the friends want to eat part of it, before the rest is used in the cake.

“OK,” says Quido, “let’s divide the whole bar into two triangular chunks by a straight diagonal cut from its upper-left corner to its lower-right corner. We will then eat all of the blocks which have been cut exactly in half, into two equal-area pieces. You will eat one half and I will eat the other half of each such block. All other blocks, that is, the blocks which are either uncut or cut into two parts of different sizes, will go directly into the cake. Of course, we will make sure the cut is perfectly precise.

Let’s see how much chocolate we get to eat!”

The input consists of two space-separated integers $M$ and $N$ given on a single line, (where $1 \leq M, N \leq 10^{18}$). The numbers $M$ and $N$ denote the number of blocks in one column and in one row, respectively, in the chocolate bar.

Print the number of blocks of the chocolate bar which are cut into exactly two pieces of equal area.