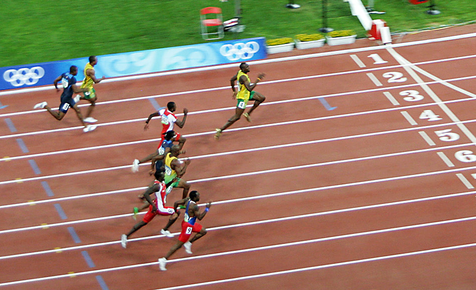 2008 Beijing Olympics by PhotoBobil
It is the day after Olympia, and you—as the organizer—are happy that everything worked well in these troublesome times. Well, not everything….

Since this morning e-mails have been filling up your inbox, containing complaints about obscured views during the most important race: the $100$-meter dash. They demand their money back, or threaten exposing you on social media. To make things worse, spectators have not just complained once, but they have sent you a separate e-mail for every person that blocked their view at some point during the race! They even wrote multiple e-mails when two or more people blocked their view at the same time. And not only that, some visitors complained to the main sponsor Dy & Son who in turn has urged you to improve the situation.

It is guaranteed that the track has a positive length, i.e. $s\neq e$. Further, you can assume that all visitors are seated at distinct locations and that no visitor is seated on the track.

Output the total number of complaints that you would receive for the given seating.