John has never been very good at maths. Due to his bad grades, his parents have sent him to the Academic Coalition of Mathematics (ACM). Despite the large amount of money his parents are spending on the ACM, John does not pay much attention during classes. However, today he has begun to think about all the effort his parents are putting into his education, and he has started to feel somewhat…guilty. So he has made a decision: he is going to improve his maths grades! 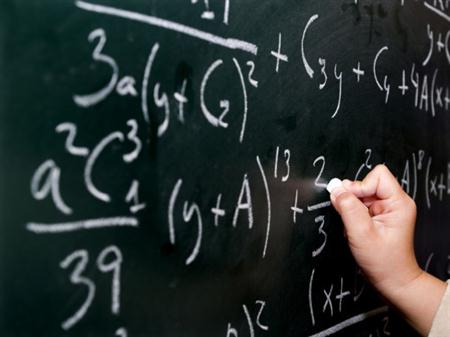 However, no sooner had he resolved to pay attention than the lesson ended. So the only thing he has been able to do is to hurriedly copy the content of the blackboard in his notebook. Today, the teacher was explaining basic arithmetic expressions with unknowns. He vaguely remembers that his classmates have been substituting values into the unknowns to obtain the expressions’ results. However, in all the hurry, John has only written down expressions, values and results in a messy fashion. So he does not know which value comes with each unknown, or which result goes with each expression.

That is the reason he needs your help: he wants to know, given an expression, some values and a result, whether it is possible or not to assign those values to the unknowns in order for the expression to evaluate to the given result. The particular assignment of values does not matter to John, as he wants to do it by himself. He only wants to know whether it is possible or not.

The input contains at most 4000 testcases. Each test case in the input file consists of two lines:

The input will finish with a dummy test case of just one line containing 0 0, which must not be processed.

For each test case, print a single line with YES if there exists an assignment of the values $v_1 \ldots v_ n$ to the unknowns such that the expression evaluates to $m$, and NO otherwise. Notice that each value $v_ i$ must be assigned to exactly one unknown.