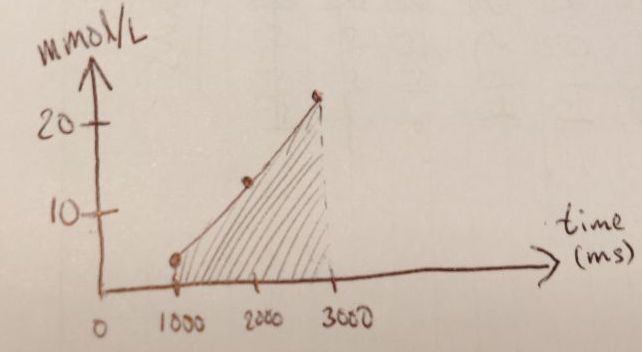 The plot of Sample Input 1. They gray area is the area under the curve formed by the three input points.
Have you heard about the mastermind Tai? He found a way to calculate the area under a glucose curve, given discrete measurement points. He even validated his formula against the approximate technique of counting the number of squares below the graph, when printed on graph paper.

Can you, just like Tai, reinvent the wheel and calculate the area under a glucose curve? Instead of publishing a paper, you need to implement the algorithm. You need this algorithm in your new app, that logs your glucose values that comes from a continuous glucose monitor. You have also figured out the trick of the device. It’s not actually continuous, it just samples the glucose value frequently, automatically.

Each glucose value is given with exactly one decimal digit.

Since you are working with a computer program, the time of each sample is given as an integer, the number of milliseconds since the first of January $1970$.

Note that a second is a thousand milliseconds.

Answers within a relative or absolute error of $10^{-6}$ will be accepted.