Alex is a circle of radius $R$. Well, life as a circle is not easy. If he were a point, moving around and passing through doors would be effortless. But now he has to carefully inspect the surroundings before making every move. 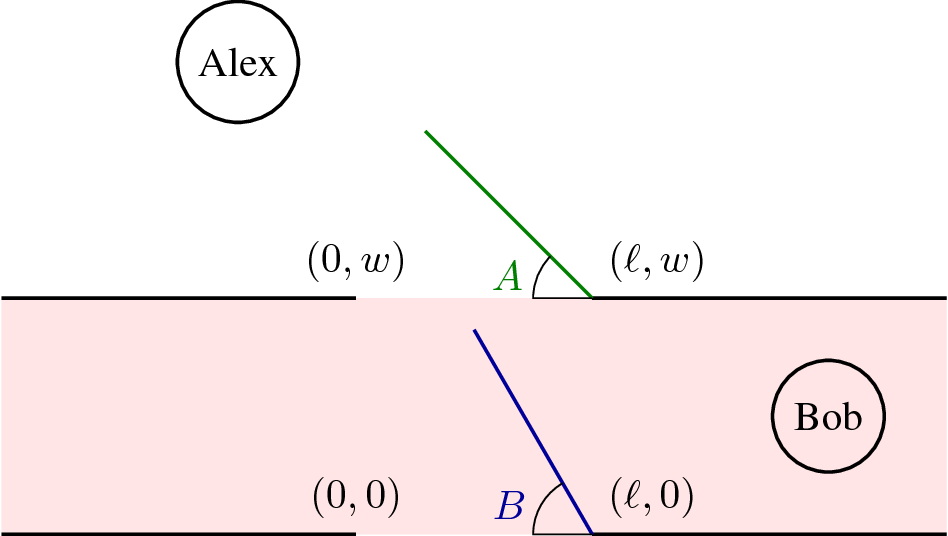 You are given $T$ scenarios. In each scenario, the angles $A$ and $B$ are given (both are radians in the range $[0, \pi ]$). Find the largest $r \leq R$ such that when Alex’s radius is shrunk to $r$, he can reach Bob while avoiding the obstacles (walls and doors).

Formally, Alex when shrunk to radius $r$ can reach Bob if and only if there exists a (continuous) curve from $(0, y_\infty )$ to $(x_\infty , w/2)$ such that the minimal distance between a point on the curve and a point on an obstacle (a wall or a door) is at least $r$. In particular, if $r = 0$ then Alex will be able to reach Bob.

For each scenario, output the required answer on a separate line. Your answer will be accepted if its absolute or relative error (compared to the judge’s answer) is at most $10^{-5}$.