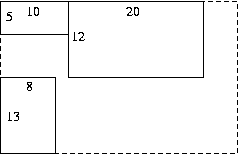 The input consists of one or more sets of data, followed by a final line containing only the value 0. Each data set starts with a line containing an integer, $m$, $1 \le m \le 80$, which is the maximum width of the resulting window. This is followed by at least one and at most 15 lines, each containing the dimensions of one rectangle, width first, then height. The end of the list of rectangles is signaled by the pair -1 -1, which is not counted as the dimensions of an actual rectangle. Each rectangle is between $1$ and $m$ units wide (inclusive) and between $1$ and $100$ units high (inclusive).