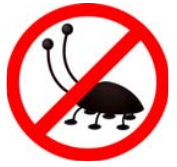 Not all bugs are insects. There are also certain kinds of bugs that may become a real nightmare for software developers. You definitely know the situation when a user calls to say “Hey, I’ve found a bug in your program.” Once you have located and removed the bug, another one appears immediately. It is a hard and never-ending process.

Recently, there appeared a promising open-source initiative called the Bug Preprocessor. The preprocessor is a program able to find all bugs in your source code and mark them, so they are relatively easy to remove. Your task is to write a program that will remove all marked bugs from the preprocessed source code.

The input contains at most $250$ test cases. Each test case starts with a line containing one integer number $T$ ($0\le T\le 100\, 000$), one space and a string $B$ used by the preprocessor to mark all bugs. The next $T$ lines then contain the preprocessed source code. All bugs are represented by a case-sensitive string $B$.

Your program must remove all of the bugs and produce the same result as if the first occurrence of $B$ on each line was removed repeatedly, until there is no other existing occurrence of $B$. Nothing else may be removed, not even spaces.