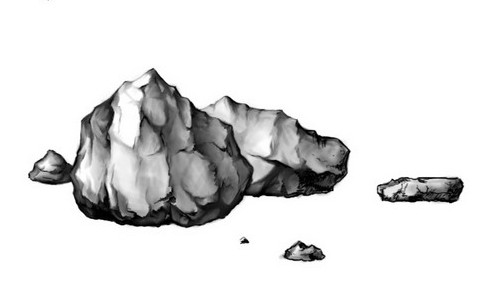 Somewhere in the neighborhood we have a very nice mountain that gives a splendid view over the surrounding area. There is one problem though: climbing this mountain is very difficult, because of rather large height differences. To make more people able to climb the mountain and enjoy the view, we would like to make the climb easier.

To do so, we will model the mountain as follows: the mountain consists of $n$ adjacent stacks of stones, and the $i$’th of these stacks has height $h_ i$. The successive height differences are therefore $h_{i+1}-h_ i$ (for $1\le i\le n-1$). We would like all absolute values of these height differences to be smaller than or equal to some number $d$.

We can do this by increasing or decreasing the height of some of the stacks. The first stack (the starting point) and the last stack (the ending point) should remain at the same height as they are initially. Since adding and removing stones requires a lot of effort, we would like to minimize the total number of added stones plus the total number of removed stones. What is this minimum number?

On the first line one positive number: the number of testcases, at most $5$. After that per testcase: