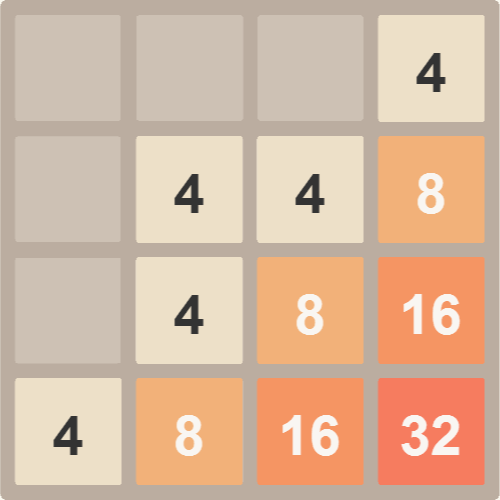 Image from wikipedia commons cc by-sa 3.0
If you are familiar with the game 2048, this problem may make sense right away.

Either way, we will define our own one-dimensional version of the game:

You are given a list of numbers containing only powers of $2$. You can “compress” this list by “pushing” it to the right. If two identical numbers are next to each other, push will cause them to merge. The “merge” in this context means that the two numbers are replaced by their sum. Each number can be merged only once—if they can merge with either of their neighbors, they merge with the one to the right. This process is evaluated from the right. For example, the list $[2, 2, 2, 2]$ will become $[4,4]$ after one push. For another example, given a list $[2,2,2]$, after a push, we end up with a new list $[2, 4]$ and we cannot change it further by “pushing”.

The first line of input contains a single positive integer $T \leq 100$ indicating the number of test cases. Next $T$ lines each contains a string of length $1 \leq L \leq 100$, composed entirely of digits from the set $\{ 2, 4, 8\} $ (our representation of the given list).

For each test case, output a line containing the shortest nice list built out of the input list by inserting zero or more of digits from the set $\{ 2, 4, 8\} $. If there are multiple optimal solutions, output the lexicographically smallest one.