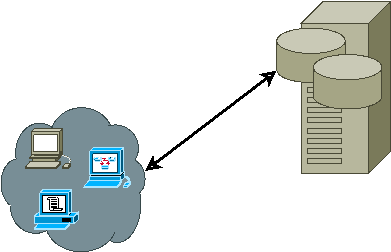 Your program will be provided with two lists – an index of valid backup image names, followed by a list of backup file names.

Your program is to compare the two lists and determine if there are either backup images in the index that have with no files or files that are not associated with any backup image in the index.

Input is structured in two blocks.

The first is a list of backup images, one per line. Each backup image name consists of $1$ to $32$ printable ASCII characters (no spaces). There may be up to $100\, 000$ images. Each image name is unique, and they may occur in any order.

The end of this block is signaled by an empty line.

The end of the second block is signaled by the end of file.

First, print the list of files with no index entries, one per line, by printing the character “F”, a single space, and then the file name.

After all the orphan files are printed, print the orphan index entries one per line by printing the character “I”, a single space, and then the backup image name.

Entries in each list are to be printed in ASCII lexicographic order.

If every file has an index entry and every index entry has one or more files, print only a line containing the string “No mismatches.”.